Bridging the border communities of

Vermont and Quebec through 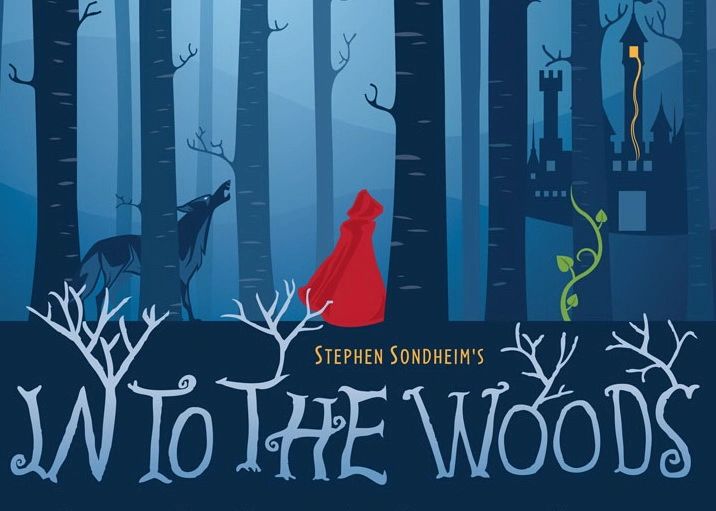 Music and Lyrics by Stephen Sondheim

Starting June 17th, all rehearsals are mandatory without exception.

Rehearsals will be most evenings of the week with some weekends.

The story follows The Baker and his wife who wish to have a child, Cinderella who wishes to go the King’s Festival, and Jack who wishes his cow would give some milk. When the Baker and his wife are visited by the neighborhood witch, who reveals to them that she placed a curse on their family, the two set off on a journey into the woods to reverse the curse. Once everyone has gotten their wish and will seemingly live happily ever after, we see how the consequences of their actions haunt them in disastrous ways. The community must come together to save each other and their kingdom, but sacrifices must be made.

All parts are open and available!

Songs for your audition are listed and marked by character role.

A harried and insecure baker who is simple and loving, yet protective of his family. He wants his wife to be happy and is willing to do anything to ensure her happiness but refuses to let others fight his battles.

Determined and bright woman who wishes to be a mother. She leads a simple yet satisfying life and is very low-maintenance yet proactive in her endeavors.

A spoiled young girl who is strong-willed, quick-witted, fearless, yet youthful and naive. There is suggestive content between the world and Little Red.

Audition Song: Stay With Me

Sarcastic, hideous-then-gorgeous, obsessive protector of Rapunzel who is straightforward and aggressive. Ability to rap/sing rapidly with amazing annunciation.

Audition Song: On The Steps of The Palace

A young, earnest maiden who is constantly mistreated by her stepmother and stepsisters.

Audition Song: There Are Giants in The Sky

The Giant killer who is 'almost a man.' He is adventurous, naive, energetic, and bright-eyed.

Audition Song: Into The Woods/Opening Part 1

Browbeating and weary, Jack's protective mother who is independent, bold, and strong-willed.

The picture of a storybook prince! Handsome and he knows it! Both always chasing the newest, most exciting endeavor.

Audition Song: Into The Woods (2nd attachment) or It Takes Two

The mean-spirited, demanding stepmother of Cinderella.

A mischievous and mysterious being. A  good-natured protector and observer.

Audition Song: On The Steps Of The Palace (Yes, The Cinderella Song.)

A loopy-but-lovely maiden who is sheltered by the Witch and terribly lonely. She yearns to experience the world.

An intellectual and pleasant storyteller who helps to orchestrate the show and illustrate lessons to the audience.

Deceased with her soul guarding and aiding her daughter from a tree.

Hungry and insatiable hunter who takes advantage of the weak by misleading and captivating his prey. (May double as Steward)

Audition Song: Steps on The Palace

Cinderella's stepsisters who are black of heart. They follow in their mother's footsteps of mistreating Cinderella.

All other Characters or those interested in joining the ensemble will sing INTO THE WOODS.

When in doubt come prepared to sing Into The Woods and Meghan may ask you try other songs too!

INTO THE WOODS is presented through special arrangement with Music Theatre International (MTI). All authorized performance materials are also supplied by MTI.

Please note that masks are mandatory for all audience members during these performances.

Online tickets available in the near future.

Tickets will be available this spring at the MAC Center for the Arts in Newport as well as the Haskell Free Library in Derby Line and Colby-Curtis Museum in Stanstead.

Tickets will also be available at the door.

Sign up to hear from us about auditions, performances and opportunities.